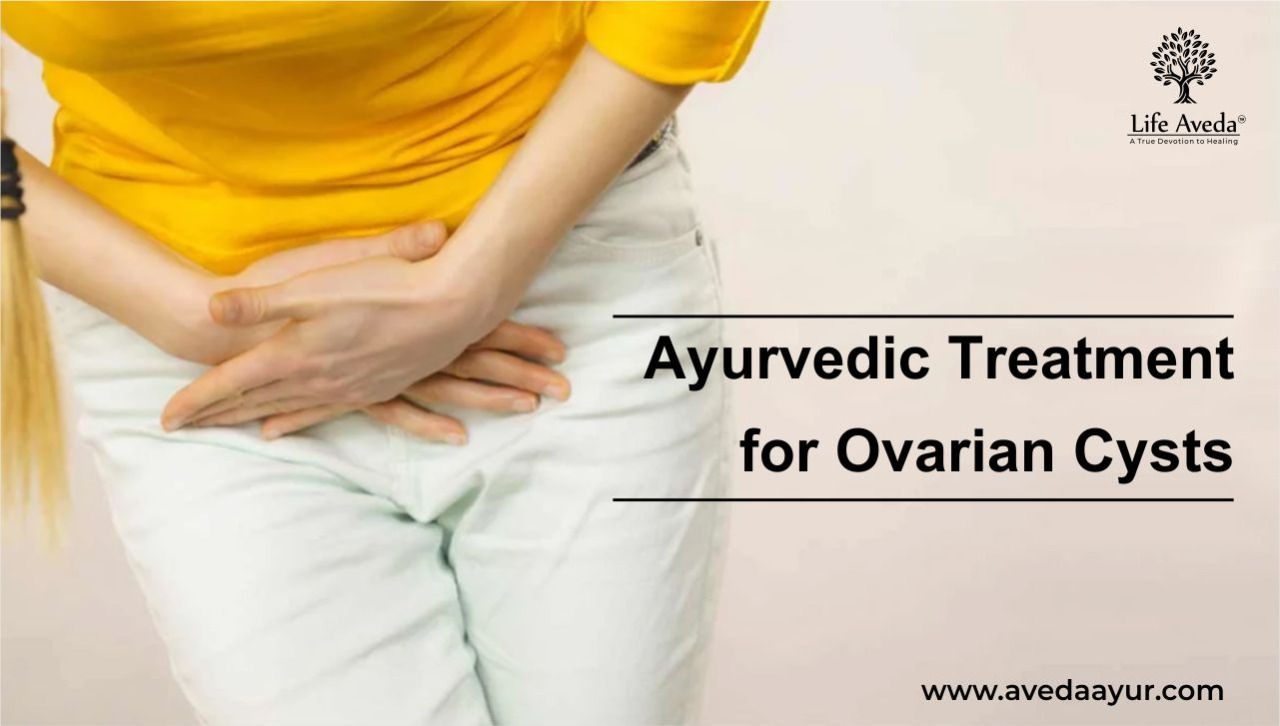 Ovaries are the vital almond-shaped organs of the female reproductive system and are found on both sides of the uterus in the lower abdomen. Generally, there are two ovaries in women that are responsible to produce eggs and the estrogen and progesterone hormones.

An ovarian cyst may be defined as a sac of fluid or semisolid material found on or within the ovaries. Normally the ovarian cysts are small, harmless, and are most common during the reproductive years. However, ovarian cysts can occur at any stage of your life. An  Ovarian cyst takes place when fluid builds up within a thin membrane of the inner side of your ovary. The size of an ovary cyst can either be of pea size or larger than an orange.

Ayurveda relates the cysts with the classification of “Kaphaj Granthi” or “Granthi Aartav Dosha”. The Ayurveda texts denote “Aartav” as ovaries and  “Granthi” as hard mass or cysts. An increase in Kapha dosha along with an imbalance in Vata and Pitta results in the formation of cysts. Artavavaha Srotas – Rasa and Rakta dhatus are the channels and tissues associated with ovarian cysts that allow ovarian cysts to grow by creating favorable conditions. Moreover, an increase in toxins and impurities may increase the number of cysts.

Ovarian cysts of different types like dermoid cysts and endometrioma cysts. But the most common type of cysts is a functional cyst and which is of two types like follicle and corpus luteum cysts.

A follicle cyst is formed during a menstrual cycle and when a follicle or sac containing a fluid inside the ovaries doesn’t break up and form a cyst on the ovary.

During a woman`s menstrual cycle, follicle sacs typically break down after releasing an egg. However, when a follicle sac doesn’t break up, additional fluid can accumulate inside the sac which causes a cyst known as corpus luteum cyst.

Other types of ovarian cysts include:

What are the Causes of Ovarian Cyst?

Ovarian cysts are mostly developed due to functional cysts during a woman`s menstrual cycle. However, there are other types of cysts as well to cause ovarian cysts.

Normally woman during every menstrual cycle grows follicles that produce estrogen and progesterone hormones and releases an egg during an ovulation cycle. However, when the normal follicle continues to grow, it is known as a functional cyst. Moreover, these functional cysts don’t cause any harm or pain and within two to three menstrual cycles they fade away on their own.

Symptoms of an ovarian cyst

Your healthcare provider will confirm first that the symptoms you are experiencing are not due to pregnancy. He/she may then perform the below tests to check the ovarian cyst:

Typically, the functional ovarian cysts don’t require any treatment as they fade away on their own. You may be given hormone medicines like birth control pills by your healthcare provider to stop ovulation and cyst formation in the future.

To manage ovarian cyst problems naturally, Ayurvedic medicines or remedies are worth considering. Ayurvedic treatment for ovarian cysts mainly focuses to balance the Vata, Pitta, and Kapha dosha, normalize the hormones of a woman`s body, and improvement in the functions of a woman’s ovaries. In Ayurveda, several natural herbs improve the functions of ovaries and are helpful to deal with the problem of ovarian cyst.

Below are some of Life Aveda`s Ayurvedic and natural products that help to deal with the problem of ovarian cyst naturally. The products not only heal the problem but address the root cause of the problem without having any side effects.

OVA CYST is a unique blend of medicinal herbs like Ashoka, Gandhari, and Gular that promotes a healthy menstrual flow rejuvenates the ovaries and maintains hormonal balance. These natural herbs help to regularize the menstrual flow, prevent, and dissolve the formation of cysts.

Female Vitality Capsules is a power-packed tonic formulation for balancing the female hormones and revitalizing the reproductive system. The Ashoka, Lodhra, and Kachnar in the Female Vitality capsules support healthy reproductive organs, improvise the libido and regularize the menstrual cycle. Shatavari promotes a healthy hormonal balance and promotes the overall well-being of the female body. Ashwagandha is a sexual stimulant herb and also relaxes the mind and body by reducing stress levels. You can take Female Vitality capsules to vitalize the whole female body.

The ovarian cyst is a common disorder among women. The functional cysts mostly disappear on their own. However certain other types of ovarian cyst require medical intervention and treatment at the initial stages can be effective. If you are struggling with an ovarian cyst problem, the above-mentioned herbal products can help you a long way to deal with the problem. Moreover, you can also consult our Ayurvedic expert on Whatsapp at +917743002519 to get the best treatment options for your condition.