Ayurveda and the 3P in Diabetes! 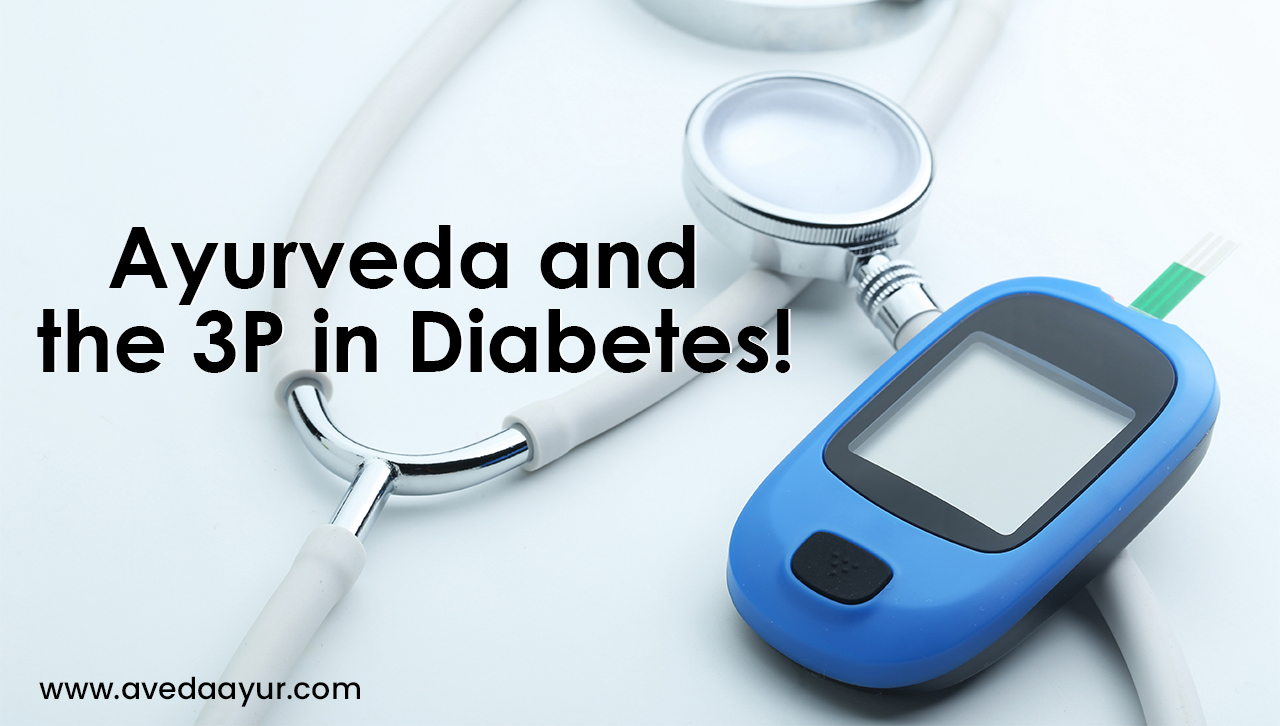 Nowadays, owing to the hectic schedule and stressful lifestyle, everyone is so occupied, that it is hardly any time for someone to keep a check on how much sugar they are consuming! And, this is what is becoming the bane of their existence! Consuming excess or less than normal sugar, both are fatal for health. Consuming too much-aerated drinks, eating too many sweets or tea and coffee leads to an imbalance in the blood sugar level which further gives rise to different diseases. Not just elders, even kids are at a constant risk! Kids are more prone to the consequences of Diabetes. Constant consumption of sweet things like chocolates, cakes, muffins, chips, nachos, etc. makes the kids extremely prone to not just the symptoms of diabetes but also the side effects related to it!

Diabetes is one of the most common diseases in the world. While some cases of diabetes are hereditary, most are caused by the stresses and habits of modern life.

Ayurveda signifies each person as a unique combination of the three doshas – Vata, Pita, and Kapha. Any imbalance in any one of doshas also, can upset the whole body. Diabetes results from an imbalance of the Kapha dosha.  Kapha dosha, when left unbalanced with an unhealthy lifestyle and a less nutritious diet, that is when it sets in as diabetes. Especially when accompanied with a weak Agni, it hampers the rate of metabolism which causes an imbalance in the sugar levels in the body. Hence, to keep diabetes at bay, ensuring a proper Kapha is essential.

In Ayurveda, diabetes is called Madumeha which means ‘‘sweet urine’’. It is decoded as an increased blood sugar level which increases the discharge of excess sugar through urine as well. According to Ayurveda, there is a possibility that this disease might be inherited genetically as well. Ojas is defined as the essence of life in Ayurveda. When Ojas is compromised, it means all the functions of the body will also stop. In diabetes, Ojas is lost from the body through the urine, which is why diabetes is also referred to as Ojomeha in Ayurveda.

Role of 3 P in Diabetes:

Diabetes is a condition when there is a lack of balance between insulin and the blood sugar level in the blood. Although there are early symptoms, which are an early indications that  blood sugar levels are higher than normal in the individual. In type 1 diabetes all three P’s develop very quickly. On the other hand, the symptoms of these 3P’s develop slowly and gradually in Type 2 diabetes. This makes its diagnosis complicated.  People with type 2 diagnosis usually recognize the symptoms too late or else keep ignoring the signs and symptoms which make the condition all the worse.

What Are the Three 3P Of Diabetes?

The 3 P’s of diabetes arise when the blood glucose level extremely high! Glucose is filtered by the kidney and then reabsorbed into the blood. When the levels of blood glucose are very high, then the kidney is not able to function properly which prevents the reabsorption of sugar in the blood. As a consequence, the excess sugar has to be passed through urine! The 3P’s of diabetes are:

A condition characterized by an Excess loss of water from the body through urination due to high levels of blood glucose in the body.It is one of the early symptoms in a diabetic patient. People who exhibits this sign, have a sudden and frequent urge for urination. This becomes a hazard at night as it disrupts sleep. The quantity of urine passed out is also more.When the levels of blood sugar increases, then the body responds with an increased frequency and volume in urination. The kidney flushes out the excess amount of blood glucose and filters the extra water. This increases the frequency of urination. During the process of filtration in the kidney, the kidney is not able to reabsorb the glucose into the blood. Therefore it ejects it out from the body through repeated urination.

Polydipsia is a condition characterized by an increase in thirst, due to dehydration caused due to excess loss of water from the body due to Polyuria.The thirst increases exceptionally in this condition. This symptom is usually connected with diabetes mellitus. Polydipsia results from the presence of excess blood glucose in the bloodstream. Diabetic patients, flush out sugar higher than the normal level which results in frequent urination. This increased urination causes water to be lost from the body and thus causes dehydration which increases thirst. This sets in the vicious cycle of thirst and urination! More thirst leads to more drinking of water and that results in increased urination and vice versa.

When the insulin level is below normal due to the high level of blood sugar in the blood, it results in sin poor absorption of blood sugar in the tissue. This condition is called Polyphagia. In this, the level of sugar is low; the levels of energy are also low which increases the hunger pangs. In this symptom patients are seen to have insatiable hunger and appetite especially for salty or sweet foods, despite eating the regular meals!

In normal conditions, the food that we eat is converted into glucose which provides the energy to do work. The pancreas in the body is responsible for producing insulin. This insulin supports the passage of glucose to the cells. But in diabetic patients, the pancreas does not function properly. As a result, sufficient insulin is not produced. This prevents the passage of glucose into the cells. Due to this, the cells start starving for glucose and the brain becomes aware of the same. This triggers the hypothalamus which results in an increases appetite.

Along with the 3P’s, the other symptoms of Diabetes include:

Ayurvedic herbs and ingredients to cure the 3P’s of diabetes:

Amla or the Indian gooseberry is one of the most potent Ayurveda herbs, for healing diabetes. It is a storehouse of vitamin C and antioxidants. This makes it ideal for treating and curbing the symptoms of diabetes.  Being rich in Chromium, it boosts the metabolism of carbohydrate and responds to insulin levels in the body; maintains the blood sugar at an optimum level. Other elements present in Amla like calcium, phosphorus, and iron help the body to absorb insulin facilitate the movement of glucose to the cells. It replenishes the Ojas, which adds to the overall vitality and good health. However, before taking Amla or Amla supplements, one should consult a doctor regarding the recommended dosage, especially for pregnant women, to avoid the adverse effects.

Neem is the next major wonder herb in Ayurveda, which delays the onset of diabetes and helps to control the blood sugar levels effectively. Neem leaves are a treasure-house of flavonoids, triterpenoid, anti-viral compounds, and glycosides, which helps to bring down high blood sugar levels. However, the dosage should be taken as per the recommendation of a doctor or else it will lead  to hypoglycemia and severe health damages.

Another Ayurvedic ingredient for curing diabetes is cinnamon. It decreases high blood pressure and fights diabetes. It reduces the sharp changes in the blood sugar levels post meals and increases the sensitivity for insulin. It is used in Ayurveda to reduce the vitiated Kapha and Vata Doshas while increasing the Pitta Dosha.

Gurmar means ‘destroyer of sugar.’ Gurmar contains gymnemic acid, which curbs sugar cravings. Gurmar is anti-diabetic which helps to block receptors in your intestines and prevent sugar absorption, which reduces the increased blood sugar levels post-meal. The chemical structure of gurmar is similar to that of sugar which helps to balance the insulin levels in the body.

Giloy is very good in managing type 2diabetes. It works like a hypoglycemic agent, which promotes the secretion of insulin and lowers blood sugar levels and burn the excess glucose, resulting in lower blood sugar levels.

Methi is extremely beneficial in managing blood sugar levels. The fibers in methi form a thick gel-like layer in the intestine, which makes the absorption of sugar difficult, consequently keeping the blood sugar levels in check. It also regulates the mechanism of glucose utilization by the body.

Jamun contains 82% water is devoid of sucrose. It is rich in alkaloids which makes it hypoglycemic. This reduces sugar levels in blood and urine. Jamun seed contains Jamboline, which prevents the conversion of starch into sugar. Jamuns have high levels of alkaloid that have been shown to reduce high levels of blood sugars.

Tulsi is said to be beneficial especially for those who are pre-diabetic and have type 2diabetes. Consuming tulsi regularly helps to reduce postprandial and fasting blood sugar levels. Tulsi leaves extract are rich in antioxidants that produce caryophyllene, eugenol, and methyl eugenol, which increase the sensitivity of the pancreatic cells towards the secretion of insulin.

Diabetes is a severe and chronic illness, often neglected till it becomes deadly. Its onset is observed in the people belonging to the group 20 years to 30 years. In diabetes, there is an increase in blood sugar levels which gives rise to many health complications. The most common symptoms seen in diabetes are the 3P’s – Polyuria, Polydipsia, and Polyphagia which increase in urine, thirst, and hunger or appetite respectively. Identifying and diagnosing Diabetes at an early stage helps to keep it under control. Aveda Ayur brings the Life Aveda Premium Neem and Advanced Dia-Revival. Both the products are enriched with the goodness of natural herbs like Neem, Gurmar, Mehtika which help to maintain the balance between the levels of insulin and blood sugar levels. These herbs are 100% safe and help to curb the 3P’s of diabetes naturally!