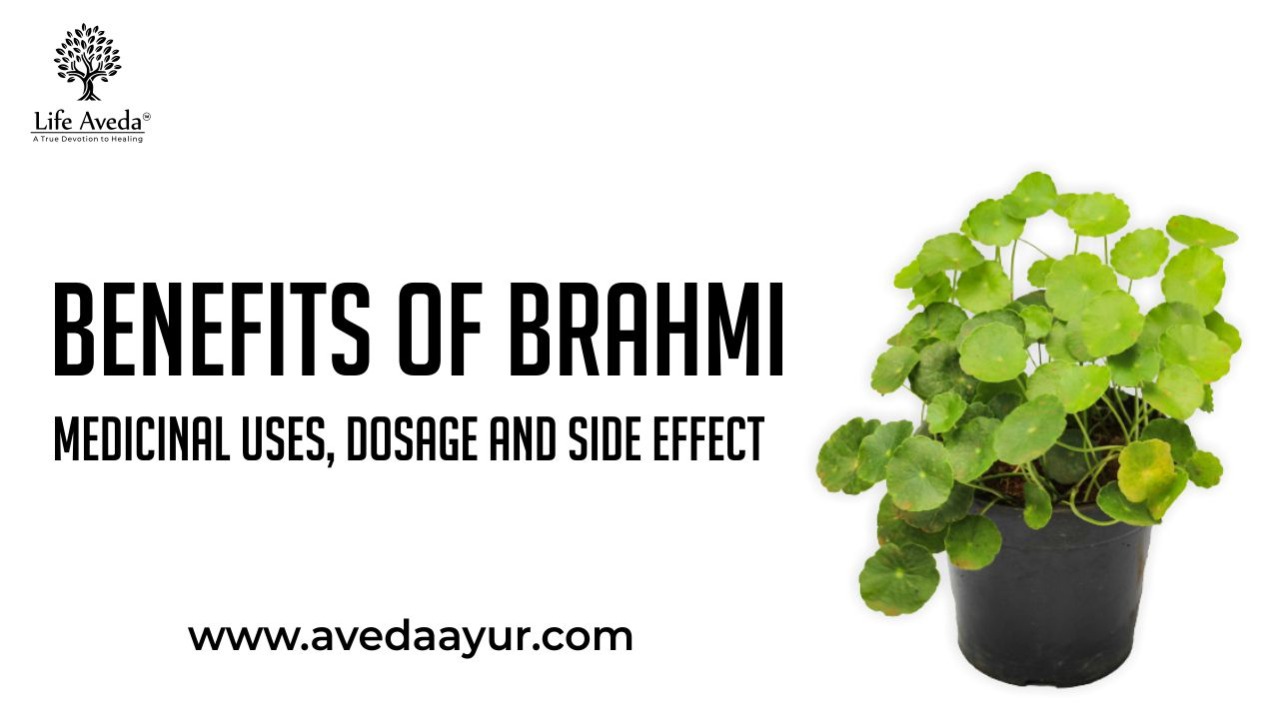 Benefits of Brahmi plant, Medicinal Uses, Dosage, and Side Effects

The Health Benefits of Brahmi is known to every Ayurvedic expert. Brahmi is one of the most powerful and oldest brain tonic that has been used in Ayurveda for ages to treat various brain-related disorders and promotes intelligence.

Brahmi word is derived from the name of Lord Brahma and Goddess Saraswati which enhances the memory.

It was described in various old textbooks around the 6th century AD-like Atharva-Veda, Charaka Samhita, and Sushruta Samhita under medhya rasayan. People who are suffering from chest congestion, bronchitis, cold, and mucus problem get treated by its leaf tea.

Ayurveda’s most precious gift for humankind to enhance memory power.

Names of Brahmi in the Sanskrit language:

Categorization according to classical books:

Balya- Group of herbs which increases immunity and strength

Prajasthapana- Herbs that are used in stabilizing pregnancy

Brahmi is a perennial, soft and non-aromatic herb that has succulent leaves. The branches of this herb are numerous which grows in marshy places. It grows up to the height of 6 inches and branches creep horizontally to cover the ground. Leaves grow in clusters of two to three alternately that are placed on the hairy stem. Its flowers are actinomorphic, small, and are purplish white. The petals are 4 to 5 in number and they can grow in water that’s why it is called a water aquarium plant.

It is found in wetlands of southern India and is also native to Europe, Asia, Africa, Australia, North and South America. It is also distributed in Marshy areas of Taiwan, Vietnam, Pakistan, and Nepal.

Brahmi is also related to Gotu Kola because it has similar qualities to that of Gotu Kola Gotu Kola is also known as Manduka Parni. But Brahmi is better than Gotu Kola so it has various medicinal uses.

Chemical constituents present in it:

What are the Ayurvedic benefits of the Brahmi plant?

Anxiety: Brahmo works as a natural anxiolytic herb that reduces the symptoms of anxiety and mental fatigue and also increases memory span. Being an anti-inflammatory, it reduces neuroinflammation which is the main cause of anxiety. It also balances vata dosha and provides a calming effect on the nervous system.

Epilepsy: In epilepsy, Brahmi works as an antioxidant that protects the damage of brain cells caused by free radicals naturally. During the attack, there is a reduction in the activity and production of certain genes as well as proteins. As per Ayurveda, it balances all three doshas and reduces the episodes of seizures. It also maintains the healthy functioning of the brain because of its medhya property.

Pain: Being an analgesic and anti-inflammatory, Brahmi works in managing pain that is caused by any nerve damage or injury. It also works by blocking the detection of pain by nerve cells and hence reduces pain.

Depression: Brahmi works as a nerve tonic that calms down the nerve cells that cause depression. This herb promotes mental health and improves memory. As per Ayurveda, it balances Vata dosha which governs bodily functions. Its medhya property improves intelligence.

These are the Brahmi Ayurvedic medicine benefits.

Brahmi is a magical herb that helps in developing memory, intelligence, and concentration of the mind. Brahmi promotes the healthy functioning of the nervous system which improves mental clarity, retention, and focus. It is a wonderful herb that rejuvenates the whole body and calms down anxiety, stress, and mood swings.

Is there any side effect of Brahmi?

Brahmi is to be avoided in patients with low heart rate conditions (Bradycardia). It works as a digestive which and it is not tolerable with people having stomach ulcers. So take it will ghee to avoid any kind of side effect.

Juice of leaves- 5ml once or twice in a day

From this article, it is concluded that Brahmi has various medicinal values but is mainly used in stress and anxiety. So consult your doctor before using it.